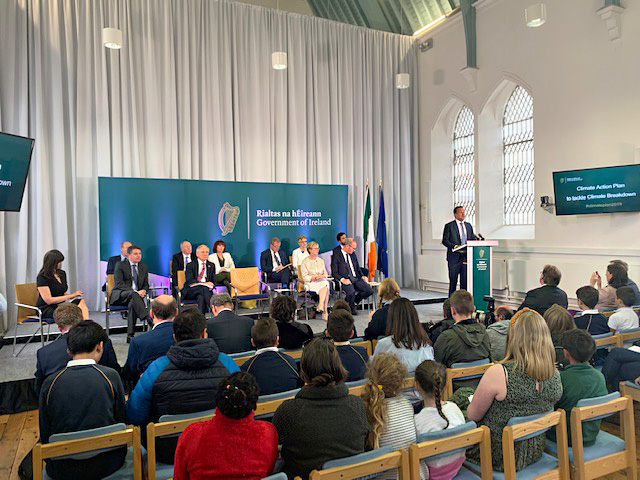 Today the Government of Ireland unveiled a new climate change action strategy that will affect nearly every person in Ireland.

The cabinet meet toddy to sign off on a climate action plan. The plan outlines the actions that will be implemented by the government of Ireland in a bid to meet our climate-change targets for the future.

These actions will include changes to various sectors, such as housing, transport, agriculture, planning, waste and others. The plan put forward is very enthusiastic but may lack many key details.

Tax hike for petrol and diesel vehicles and the addition of 95’000 electric vehicles to the roads.

Motorists will be heavily affected by the new climate change action strategy. There will be tax hikes on petrol and diesel vehicles. The introduction of a car scrappage scheme to reduce carbon intensive vehicles on the road and to promote a move towards electrical vehicles EV’s. Ultimately, legislation will be introduced to ban the sale of new fossil fuel cars from 2030 and to stop granting NCTs from 2045. There is talk about the Bus Connect scheme being introduced and all future public buses being electronic.

The government are looking to replace carbon intensive heating systems by phasing out oil and gas boilers in new and existing homes by 2026.

New building regulations will be added to existing and new buildings in Ireland. This will see every building in Ireland having to obtain a Building energy rating certificate (BER) to show the property’s efficiency.

The Irish government will be introducing funding in the form of a ‘Retrofit plan’ will be available to homeowners allowing them to implement environmentally sustainable changes to their home and pay it back over time through their electricity bill or property tax.

Single-use plastics and carbon to be hit with higher taxes

New tax levies to be introduced on plastics. The government is setting out to eliminate all non-recyclable plastic in Ireland, by imposing a high levie on plastics that are harder to recycle. They are looking to implement the ban of single use plastics like straws, cups, and balloons by 2020.

The government will be implementing a scheme that they hope will encourage people to become engaged in micro generational electricity by 2021. Which will allow people to create their own energy and sell the excess back to the grid. Predicting Ireland will be using 70% of renewable energy by 2030.

Other areas that were covered in the action strategy.

Check out our other weekly articles on the off shore wind farms proposed for the Irish coast and How in 2018 Ireland was the worth performing Eu country in the fight against climate change.